Sometimes Kanye can be a really conscious rapper that makes compelling, thoughtful music. This article IS NOT about those lyrics

You know who is also from the Southside of Chicago? Kanye Omari West.

Ever since I heard “Slow Jamz” in the back seat of my mom’s silver Dodge Caravan in the parking lot of the Walgreens at 95th and Ashland, I have been a Kanye fan. I’ve been through thick and thin with him. I have defended his honor like a medieval knight through Katrina fundraisers, Talyor Swifts and Love Lockdowns. But I have to say, I’m getting tired of explaining Kanye to my non-Chicago people and his latest exploits are getting harder to defend. This was a man who said on national TV that “Bush didn’t care about black people” but turned around and met with Agent Orange himself in 2016.

Unfortunately, my opinion of his public persona mirrors my waning admiration for his music. Kanye has always had funny, irreverent lyrics in his music but it seems that more and more when he cracks jokes, I’m laughing AT him rather than WITH him. So today, I’m writing my final love letter to my Kanye fandom.

In honor of this potential post-Ye era in my life, I wanted to share with you my ten favorite verses from the Yeezus himself. These aren’t his best verses; just the ones that have made me laugh the hardest and constantly made me say “this motherfucka is crazy.” Since there are so many of these verses, I am limiting them to only his 6 solo studio albums. No guest verses, Watch the Throne/G.O.O.D music albums or rants this time kids.

Look. There are plenty of other lyrics in Kanye’s serato that I could choose from but this one simple makes me laugh all the time because of it connection to 2016’s biggest internet challenge. Kanye’s art is so far ahead of pop culture that life imitates him. Every time I see the Mannequin Challenge, this lyric pops in my head. This is usually followed by me remembering Rae Sremmurd’s physical appearance  and marveling at how true this statement really is.

Nine – “Oh my god, is that a black card? / I turned around and replied, “Why yes / But I prefer the term African American Express”

For anyone that doesn’t think Kanye has bars, listen to Last Call. The verse from which this quote is pulled contained the first sighting of Kanye’s fashion persona “The Louis Vitton Don.” and another part was reused by Kanye in Beyonce’s “Ego” remix. It also contains around 11 minutes of Kanye talking about how he ghostwrote for rappers in Chicago before moving to Newark to eventually get signed with Rocafella. It’s kinda of sad to listen to this early version of Kanye because while he still had confidence out to wahzoo, it showed how lighthearted and grateful he was to just be in the rap game. He truly seemed to be enjoying himself while recording this album. Today’s Kanye seems like the opposite. I miss the old Kanye.

Eight – “Black dick all in your spouse again / And I know she like chocolate men / She got more niggas off than Cochran, HAH!”

Ah yes. The first sighting of a Yeezus verse and rest assured this will not be the last. I was very close to making the whole post JUST Yeezus lyrics. This album is ridiculous. It’s one of those pieces of art that straddles a very thin line between being genius and insanity. These lyrics came at the end of the very first verse of the album so Kanye let us know right away that this would not be a timid look into the perturbed soul like 808 and Heartbreak.

Also about 12 seconds after delivering this line, Kanye presents a children’s gospel choir singing “Oh, he’ll give us what we need. It may not be what we want.” Thin line people. Thin line.

I have issues. How do I know I have issues? One of my favorite songs EVER is “I’m In It.” I know I shouldn’t like it but honestly, I could listen to this song over and over again. Here is a summary. It starts with a woman’s sexual moans. This transitions to the verse that contains the first line mentioned above. It then transitions to an unintelligible Jamaican rap, of which the only words I can understand are “We beat murder charges like OJ.” (Yes, that is the second OJ case reference in about 100 words.) This is followed by the chorus which is basically Kanye saying “I’m in it” a couple of times with Bon Iver mumbling in the background. We proceed to Kanye’s second verse which contains the “civil rights sign” lyric and the chorus once again. Then in another drastic switch in tone, we break it down to Bon Iver singing “Star Fucker” 6 times in a row with a cello playing in the background. Finally we conclude with a monster verse from Kanye in which he rhymes “Tron Bike” with “Zeigeist” and ends the whole song on the word Swaghili. THIS SONG IS AMAZING!!!

Vintage Kanye. As I said before, the second I heard this lyric, I became an instant fan of his. I feel about this line the same way Stefon feels about a hot new club in New York. It’s got everything:

Five – “In a French-ass restaurant / HURRY UP WITH MY DAMN CROISSANTS!”

First of all, the name of this song is “I Am a God” on an album call Yeezus. Let that marinate. This line was damn near the highlight of the whole album (until I heard “I’m In It” of course). But let’s be sincere for a second. I don’t care whether its Red Lobster, Olive Garden, or a five-star bistro in Paris, it always takes too long for restaurants to bring out the bread. Waiter! You know we’re hungry and waiting, so just bring them out first thing. No need to foreplay with stupid questions like “Can I get you anything to drink?” or “Do you want to hear today’s special?” Drop that bread as soon as we sit down and I guarantee you a 25% tip is coming your way. Also, you know one basket isn’t enough so just bring two because you know we’re going to tear through the free food in about two minutes. 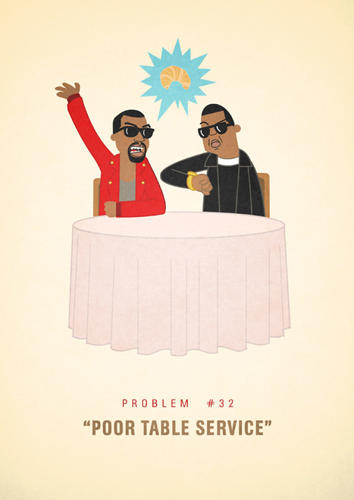 Four – “And they DCFS, some of them dyslexic / Their favorite 50 Cent song ‘12 Questions’”

As a former 4th grade English teacher, it takes a true wit to make me laugh when referencing a child’s reading disability. Maybe this was the beginning of the Kanye/50 feud that culminated with 50 promising to retire if Kanye outsold him. Remember when Kanye actually did outsell him and 50 didn’t retire? I’m starting to think 50 DID honor that bet because 2009 was around the last time I heard a new 50 song.

Also, the song “We Don’t Care” contains my favorite real line of Kanye that I’m just not going to post here. Let just say that Kanye artfully informs the audience that it is hard to sell drugs but people do it anyway because it’s difficult to get enough money working a legal job. Let’s just leave it at that.

Bring Me Down (Late Registration)

I can’t believe it took this long for my favorite Kanye album to make its appearance, but what a line it is. This line is so good I am currently developing a pilot for FOX based solely on the 19 words written above. It’s called The Haters and stars: Charlemagne tha God as the father, Azalea Banks as the mother, the “Skeptical African Kid” meme as the son and, of course, Silky Johnson as the Uncle for comedic relief. Gotta support black TV shows.

Is there a line that describes Kanye more accurately than this one? I mean honestly.

I take back my previous statement.